This year it was the fifteenth birthday of the oldest child.  Much planning. Many fairy lights. I over-catered a bit.  Well, a lot.  Those teenage girls eat like birds.  If the birds were tiny and not naughty ibis. (On a side note, I had my children convinced that the proper name for the garbage bin birds known as ibis was 'Naughty Ibis' for years after one of them stole a sandwich right out of Gab's hand at a picnic at Southbank one day).  We had baked potatoes filled with mince and coleslaw, salad and cheese and stuff- an excellent meal to feed lots of people with an indeterminate number of gluten frees, vegetarians, vegans and carnivores.

45 of her closest friends all came dressed as something starting with 'A'.  There were Assassins, Allsorts, Athletes, Angels, Amigos, Aphrodite, Ants, Athena, an Award, ANne of Green Gables, Aurora, Arwen, Ariel and A person.  Annika went as Audrey Hepburn. 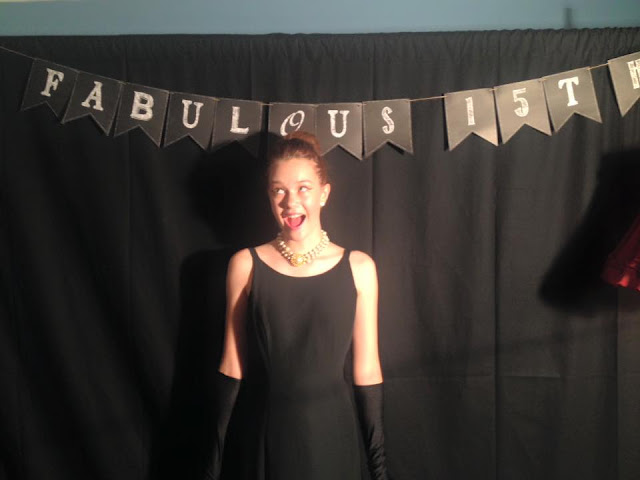 I was pretty proud of my hair and make up job - although she raced off before I could get a close up photo of it.  We found her dress and jewellary at an opshop.

There was music and some dancing and many many selfies and photos taken by the girls.  I probably only embarrassed my children a few times by dancing or trying to crack jokes with their friends.

I dressed up as an Angel.  I thought I would hairspray my hair out from my head so it would be like a golden halo of light.  This is what I thought in my head.  In reality, coupled with the extremely red face I got from cooking in a hot kitchen all night for the party, I looked more like Asylum Escapee.  Oh well.  That wasn't embarrassing for my teenage daughter.  Dum de dum. Not one bit. 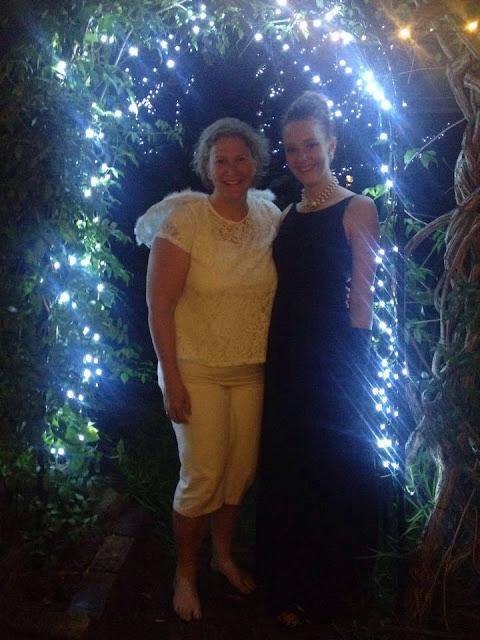 Happy birthday my very grown up person who is kind of a mini me - but taller.....

It is so lovely to see her growing up and becoming the person God designed her to be.  And phew - done grade nine with one girl.  One down, one to go.
Posted by wide eyed at 7:50 PM

Email ThisBlogThis!Share to TwitterShare to FacebookShare to Pinterest
Labels: family

Love to hear from you...just so I know there is someone out there!

wide eyed
Hi, I'm Catriona - I fill my days with heaps of life - sometimes my eyes stretch wide open at the wonder. Or the mess. Or because there's a bit of dirt that has flown in. I sometimes blog. I live in Brisbane with my husband and a couple of kids, some chickens and a shadow obsessed dog.